“Learning (and teaching, such as it is) is not a process of communication, but rather, a process of immersion. Put loosely, it suggests the idea of teaching not by telling or even demonstrating but rather through the creation (or identification) of an environment into which a learner is immersed”.

I re-discovered the above quote on a one of my seminar slides made back in 2006 while thinking about this podcast episode and blog post. Profound stuff and it was in fact 2004, when I received an unexpected email from someone who subsequently became a good friend and colleague meeting face-to-face 1.5 years later, after regular weekly Skype chats and collaborative projects together.  Dr Randall Kindley from Minnesota USA introduced me to what we called then Scenario-Based Learning (SBL), Situational Learning (SL), Simulations, eSims, Role Plays and Games.  This was all describing a methodology now becoming of age, which is often called Immersive Learning (IL).

The interest and energy around the campus was building steadily fueled by our work with Sheila Kavanagh OAM, a colleague and awarded burns nurse for her help in the 2002 Bali Bombings Disaster. Together we built an early example of immersive learning called the “Disaster Down Under”   to help if such a tragedy ever happened again.  In 2005 Randall visited Adelaide for a series of seminars and workshops.   I can remember vividly how much trouble we had trying to find software to serve the need for what is called branching.  IL works by presenting a learning with the 3C’s Challenges, Choices and Consequences   Back then the only affordable way we could find handling branching was Moodle and that was in its early stages. Everyone realized the potential of IL but as learning designers/educators it was a challenge to support the methodology with interactive learning modules or software managed processes.

We were devastated in 2006 when we heard Randall had a massive heart attack without notice and had died – educational research lost a pioneering thought leader. However his legacy has lived on in Adelaide and he would be thrilled at knowing that today the technology has caught up to the pedagogical needs and it is a new day for IL. 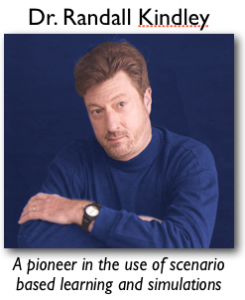 In this blog entry I have listed the available links to the work of Randall and it wont take you long to realize how far ahead of the wave his thinking was – spend some time listening and reading … your teaching may never be the same again.

In 2007 while on a trip to the USA I was introduced to a software product called Simwriter.  It was in its early development as well so I have been tracking it’s progress ever since. Late in 2012 I received from NexLearn the publishers, notification about an exciting new development in IL.  The Immersive Leaning University  (ILU) was having a Conference and Symposium in San Antonio TX in Jan 2013.  Thanks to some significant prize money from 2012, I was able to attend and it was really worth it.  My passion for IL has been rekindled and now “we have the technology!”. I am now exploring, learning and developing with  three major software offerings

Simwriter Simplicity  , Articulate Storyline  and the cloud based Zebrazapps  In future episodes I will be unpacking this software and sharing insights.  I am also excited to be able to talk to some of today’s pioneers in pushing IL forward and publishing them as episodes… stay tuned.

Please join me in this journey and share your examples of Immersive Learning and how it helped achieve outcomes in transformative education.

The Heritage of a Prophet: Dr Randall Kindley’s Legacy