First there was Pedagogy and Webinars

[dropcap]O[/dropcap]nline Learning has always had a foundational principle that the pedagogy should drive the technology and not the other way around. So pedagogical benefits (PBs) should always be defined when thinking about technology. This approach was applied to an emerging pedagogy of synchronous learning events using what is referred to as virtual classrooms. They are now known as Webinars. I was instrumental in leading the way in Australia for some of the very first multiple venue presentations (MVPs) in Higher Education. MVPs are when multiple face-to-face seminars connect using web based technology to have a live event. Two different MVP events that were my idea, I produced and managed, stand out as evidence of the breadth of impact that was achieved across Australia and New Zealand. 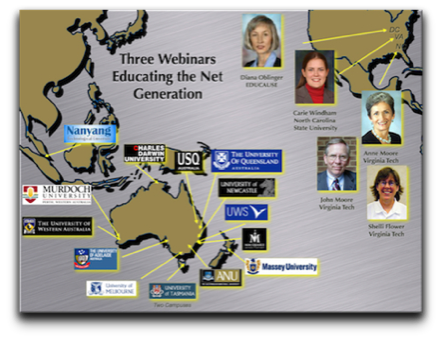 Early in 2005 EDUCAUSE published an online book Educating the Net Generation edited by Dr. Diana Oblinger, then VP (now President) of EDUCAUSE. I made a bold request to Diana to give a MVP, in which she would present to a seminar event here at Adelaide and other locations around Australia. Diana was delighted and increased the event to three webinars.

I sent an email to universities around Australia and within 36 hours 14 different universities across Australia had accepted. This was a great success, groundbreaking as a webinar design and won a LOLA (Live Online Awards), Creativity in Synchronous Design: creative online activity, technique or approach.[/cs_text][/cs_column][/cs_row][/cs_section]