[dropcap]I[/dropcap]t all started with the Graduate Certificate in Online Learning (HE). Sophie and Cathy were in the first wave of graduates, and as I developed the majority of the curriculum and taught in it, we got to know each other very well. Their passion for their students was obvious so I challenged them with 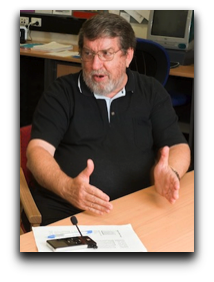 “What if I could take 30-40% of your face-to-face lecture content and package it up and deliver it to your students using elearning technology, would you be interested?”

Before they had a chance to respond I continued

“But wait there’s more, and what if I could add formative assessment and then diagnostic assessment as well and then get the results back to you ‘just in time’ so you know what they know, as well as what they don’t know and you can change what you teach them face-to-face so you achieve better learning outcomes… now would you be interested”?

Their answer began a journey that has made history at the University of Adelaide. Their award is the first time the Elder teaching award and VC’s teaching prize has been given to a team. They embraced Just in Time Teaching (JiTT) and under my mentoring they begun building Interactive Learning Modules (ILM’s). In 2006 I introduced them (and the rest of the University) to the rapid elearning deployment software called Articulate and they have been making ILMs ever since with great success. Students have responded positively to this style of teaching and it is reflected in improvements in their grades.

“Using comparative assessment metrics, the class average for the final exam has increased slightly from 67% in 2007, pre ILMs, to an average of 72% from 2008-2010 post ILMs. However, the most significant impact has been witnessed in the student progression rates. The failure rate pre ILMs for the semester 2 exam was 15% in 2007, decreasing to an average of 6% between the years of 2008-2010 and possibly signifying that the ILMs have made the biggest impact on those students who have traditionally struggled with the content.”

Students report they now find the hardest part of the course, Embryology, much easier. JiTT and ILMs are the methods Sophie and Cathy have used to turn it around in the minds of the students. Another indicator of the success in a student’s perception of a pedagogical approach is when they come to the teacher and ask to use the same approach to present their research assignments for grading. Students now are using ILM’s as well as the teachers… to a learning designer that is quite a success indicator.[/tab]

Pharmacology and the Final Word from the students of Oral Health

[dropcap]W[/dropcap]ait….but there’s more! I introduced Dr Abdallah Salem of Pharmacology to this JiTT/Articulate model when he received a L&T Implementation grant in 2009-10 to use Articulate to integrate functionalities available within MyUni. The aim was to develop online workshop assessment materials which were both formative and summative online assessment. Abdallah reported there were quite a few positive comments about the Articulate modules when students were asked the open ended question, “What was the best aspects of the course”.

However, the final word on JiTT and ILMs is from the students. We have now shifted the emphasis from teacher centric to student centric and we are calling the pedagogy Effective Pre Lecture Engagement (EPLE). Please hear the students themselves talk about how much they appreciate ILMs. How they consolidate the knowledge with Checkpoints (short frequent formative quizzes) and they reinforce the key concepts. Another says they build self-confidence and they want the majority of their lectures as ILMs. A great final comment from the student is – “they work for me”.